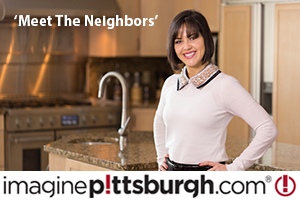 “In Pittsburgh you can reach your goals faster than in other cities. People here want to see others succeed.”

For Nicole Ziccarelli, preparing and enjoying delicious food has long been a family affair.

Much of childhood was spent at the elbow of her yiayia – Greek for grandmother – whose McKeesport home was a center for daylong festivals of relatives rolling grapes leaves or layering spanakopita.

Nicole went on to study communications and then law at Penn State, spending a semester at the University of London at Bloomsbury and working as a legal research fellow for the U.S.-China Economic and Security Review Commission in Washington, D.C. She also participated in the Walt Disney World College Program, working on Big Thunder Mountain Railroad in the Magic Kingdom.

Check out the Video Courtesy of Imagine Pittsburgh:

She returned to the Pittsburgh region to practice with a mid-sized firm, marrying into a large Italian-American family whose love of food and family matched her own. After the birth of son Franco, Nicole began creating recipes for him from fresh produce, urging him to “eat his colors” in the form of pureed squash, beets or peas. As soon as possible, she moved him to simpler versions of the foods that she and her husband, Frank, were eating. When twins Melina and Valentina came along in 2012, Nicole became a sole practitioner to have a more flexible schedule, one that would allow for work, family and such creative pursuits as blogging.

She describes her blog, Mediterranean Baby, as a kind of road map to help families prepare tasty meals that are simple enough to allow time to sit down and enjoy them with family or friends. “For me cooking has always been calming, but I know for other people it can be intimidating. I wanted to tell people to keep it simple; we don’t always have to be complicating things. Just stick to basic ingredients that are as fresh as can be, and don’t worry so much.

“I know how it is: it’s often easier to run in the door and throw something together for the kids because they’re hungry at that moment, and you eat an adult meal later at the kitchen counter,” she adds. “It’s difficult, but I really encourage parents to find a way to have meals together with the kids.“

It’s not just good for nutrition, she theorizes, but for childhood learning. Her trio is usually in the kitchen with her as she prepares meals, and she’ll talk to them about the colors and shapes of the foods she’s using, giving all three kids a chance at stirring things a mixing bowl. A 15-year Harvard study bears out this mother’s instinct, indicating that even low-income children whose family gathers for regular meals have increased vocabulary and verbal skills compared to their peers.

Nicole encourages parents to prepare larger meals on the weekends that will allow for leftovers through the work week, when slow cookers can help round out meals. (Mediterranean Baby offers plenty of slow-cooker recipes that can be prepared in the morning to be ready and waiting in the evening.) “Try to get home for dinner with the family, even if you have to go back out to the office afterwards,” she says. “We turn off our phones, and during mealtimes we are fully present. Dinner together is a little sanctuary for our family.”