When I make them in the States, I always add some garden fresh zucchini and peppers to please everyone.  Yes, they take a bit more time to prep than most of my recipes, but every once and a while, it’s worth it.  I just made these last week for my mom, aunt, and cousin.  My cousin just recently had her first baby and we’ve been traveling to one another’s homes every week for visits.  Whoever hosts the gathering takes care of the food and we eat all day!!!  This meal was our dinner and I made three pans so there was plenty to take home to my koumbaros, too!   xo 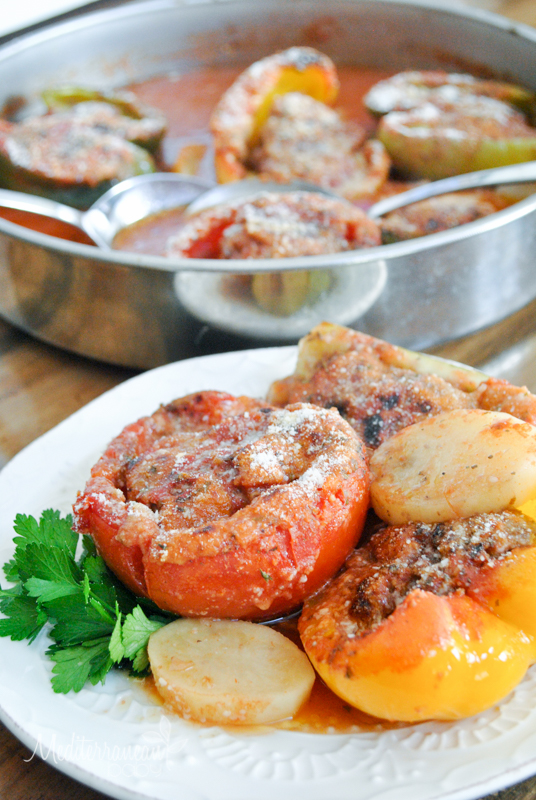 Preheat the oven to 350 degrees.

Prep the veggies. Slice the zucchini lengthwise and scoop out the seeds and core. Place them in a medium size mixing bowl to the side. If you're using a large zucchini, slice the boat halfway down the middle, so you have four little boats. Slice the tops off of the tomatoes and core them as well. Add the seeds and juices to the mixing bowl. Slice the tops off of the peppers and slice them in half lengthwise to create two bowls. Discard the ribs and seeds.

Line a large baking pan with the prepared veggies. Fill them with the meat and veggie mixture.

Peel the potatoes and slice them in 1/2 inch thick discs. Place them in the pan in between the veggies.

Cover and bake for 1 hour. Uncover, sprinkle with breadcrumbs, and broil for 4-5 minutes until browned.

Serve each serving with a healthy drizzle of olive oil and feta cheese.